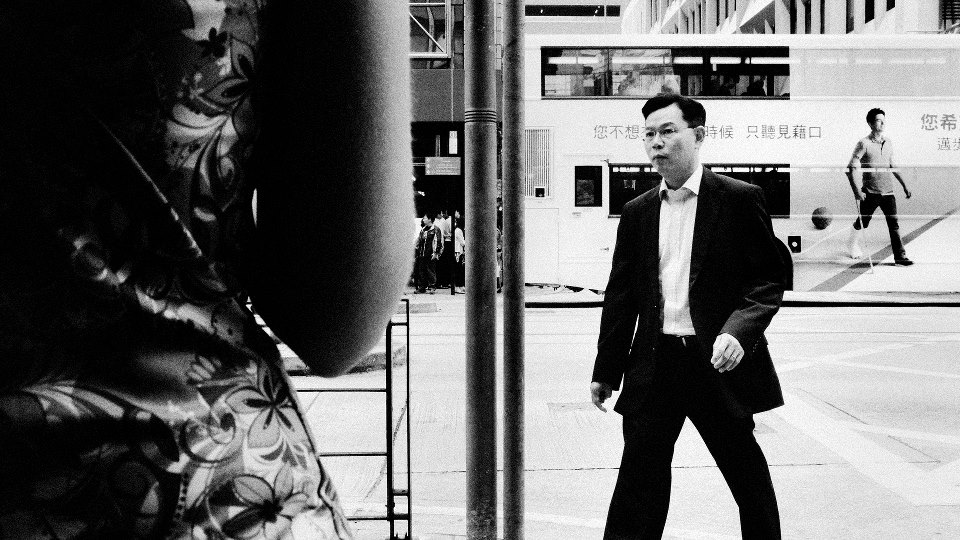 Undoubtedly there are visual similarities when we compare the two. It can also be argued that Street Photographs can and often do, ‘acquire’ value as documentary images, especially with the passage of time, because they can offer a glimpse as to how people ‘looked’ in the past. But that is where the similarities end.

One of the reasons this confusion persists is because one of the major contributors to the development and the form of Street Photography was Henri Cartier-Bresson who made his living as a photojournalist. HCB never called himself a street photographer, but he also claimed to have no interest in documenting. Many of his photo journalistic images are unremarkable, but the images he created as a form of self expression have become iconic and went on to inspire the next generation of ‘street’ photographers, primarily in New York city.

Cartier-Bresson’s approach to photographing people in daily life situations consisted of very careful and precise framing and compositions that were used to setup the capture of a ‘decisive moment’. That moment alone could bring full meaning to the image, a split second earlier or a split second later could not achieve the same meaning. HCB professed that for him photography meant recognizing when those moments were about to happen before they did so that he could line up his vision, his mind and his heart all on the same axis. Then and only then could his photograph be more than just a snapshot or a mere document.

Street Photography is not portraiture, it is not still life and neither does it concern itself with urban landscape. Street Photography is instinctual, un-premeditated, reactive and spontaneous, it is unposed and untagged and most importantly it is candid. Candid in this context literally means it is done in such a way that the subjects are not aware they are being photographed at the exact moment the image is being captured. The subjects are always people (who are strangers) and the the theme focuses around human moments – not ‘humanistic’ moments. This difference in words is subtle but semantically considerable. Eugene Smith was a humanist photographer. Garry Winogrand was a street photographer, though he hated the tern precisely because it was used so loosely by some.

The unescapable hallmarks of Street Photography are that it is enigmatic and quirky and more often than not surreal. That it creates relationships within the frame that may well not exist in reality. Relationships between strangers or between people and their surroundings. It achieves this through intentional juxtapositions, a combination of selective framing and exact timing. Asking a stranger for permission to photograph them in the street, instantly makes it a portrait, a street portrait albeit but not Street Photography. The moment a subject collaborates, he or she is posing. Documentary photography encompasses portraits and especially when it is humanist photography, but that is not the case with Street Photography. To call a picture a street photography portrait is in itself an oxymoron.

Let’s take a closer look at the motivation behind Street Photography compared to Documentary photography.

There is only one subject in Street Photography: people. Conversely, the subjects for documentary photographers can be everything and anything; including people is not a pre-requisite depending on the topic being covered.

Street Photography is expressed through unexpected and unpredictable actions that lead to a ‘Decisive Moment’, a poetic moment, a poignant instant. Documentary photography on the other hand, is expressed through the objective presentation of facts for an ongoing activity or situation over a finite period of time which can run from as short as a single day or as long as over a number of years.

A street photographer is not familiar, nor cares about the subjects, it is totally irrelevant who or what they are or what their ‘situation’ is. A street photographer creates the ‘situation’, where one does not exist. In contrast to this, a documentary photographer is deeply concerned and motivated about the subject, has conducted prior research and has formed opinions about it and is ultimately doing this in order to raise awareness of a situation or event. For example the victims of AIDS due to blood transfusion, or the victims of the tsunami or the poor and destitute, or a particular street protest and so on. These are all subjects that documentary photographers tackle because they have an agenda. The street photographer is only concerned with what a potential subject is about to do in front of the camera, how to frame it in order to create a situation and finally how to select the best timing to trigger the shutter in order to make that moment a meaningful one.

In Street Photography the photographer must find ways to become invisible so as to be able to capture candid moments. This is most often achieved by shooting from the hip at very close range. The documentary photographer on the other hand, may or may not choose to photograph in a candid way, rather, he or she may have a need to photograph surreptitiously or from a considerable distance, due to potential risks involving the subjects and the specific ‘situation’. In order for the street photographer to recognize a decisive moment about to occur, he or she must be fairly close to the subjects and traditionally the practitioners of the form limit themselves to lenses of 50mm or shorter (on a full frame sensor or 35mm film). The journalist and documentary photography, on the other hand, might choose a range of focal lengths from an arsenal of lenses depending on what they are photographing.

Street photographers wander the streets watching, observing, hoping that something will occur before them. They have no preference of whom to photograph and since Street Photography is reactive and spontaneous, there is little to no time afforded to think or intellectualize. Inversely, the documentary photographer has an agenda that narrows down the choices of whom to photograph based on that agenda. Martin Parr only shoots what is relevant to the particular series that he is working on at the time, such as ‘the mundane and boring’ or the ‘cheap and nasty tastes’ and so on. Martin Parr is a documentary photographer who has also been recognized and embraced by the art world because of his conceptual thinking, however, he is not a street photographer as many mistakenly label him.

In conclusion, Street Photography as defined by the images produced by the greats during its peak (1950s – 1960s). As a form it is well defined and understood by art historians, academics, critics and curators has very little in common to documentary photography or environmental portraiture or humanist photography.

Read more from Evangelo Costadimas here.
Join interesting discussions regarding this topic in our SVP-Forum