We are honored to be able to interview you for our Featured Photographer format on www.streetviewphotography.net! 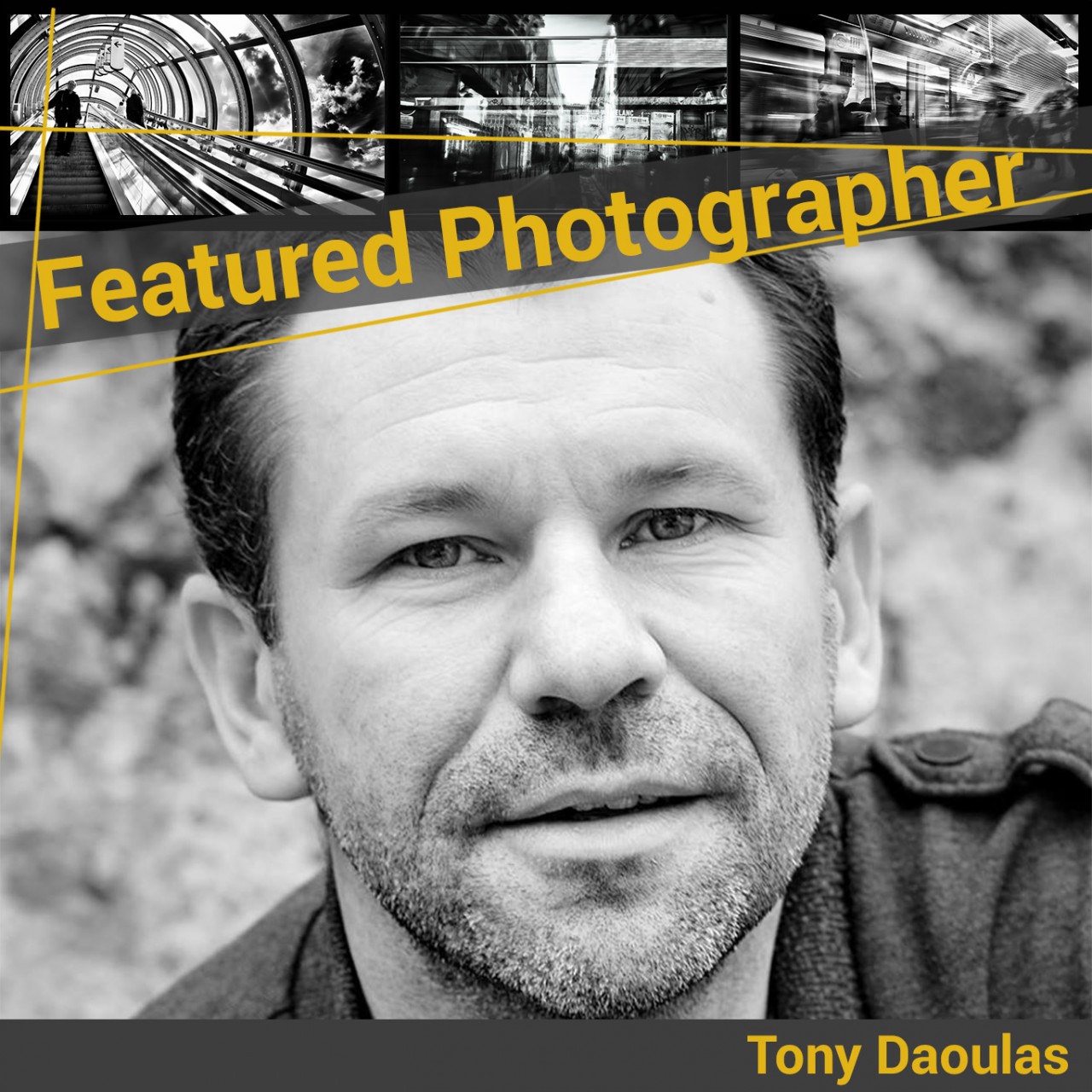 First I would like to thank SVP for honoring me with this Interview. I am 43, I was born and grew up in Combrit-Ste Marine, a small seaside town in South Brittany. I now live in Paris, with my partner and our 5-month baby boy. I have worked as a location manager for movies and TV shows for the past 15 years. I also work  as a cameraman in some Film projects. 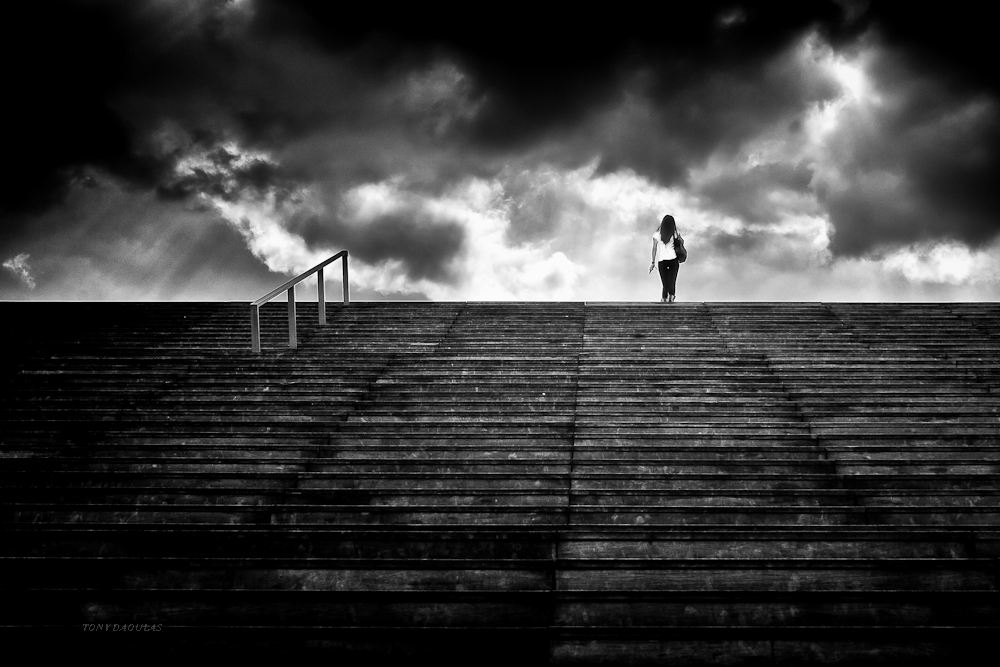 Seeing your remarkable work, I am curious where your creativity comes from?

I could not exactly say where my creativity came from. I think that, like other photographers, painters, drawers, musicians and so on, I have some artistic sensitivity buried deep inside, which spontaneously directs me towards a definite place and time.
However, I have always been deep into movies, SF/fantasy/anticipation novels, as well as music and history, and all of them have been major sources of inspiration. They probably helped me a lot when it comes to framing, composition and trying to tell stories through my pictures. 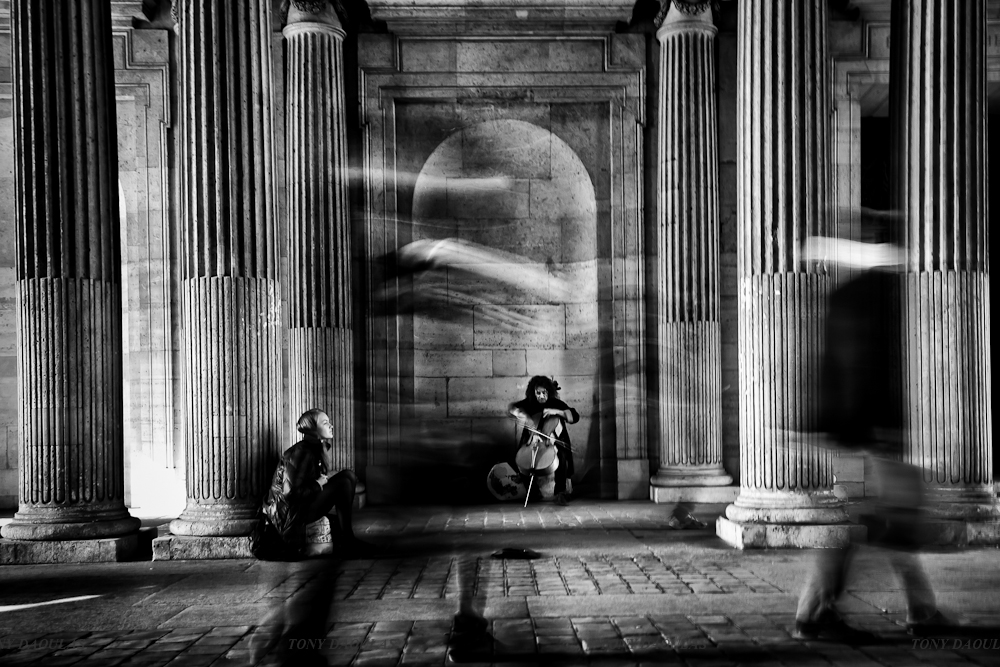 I came about photography very recently, completely on my own. The first picture that came out of my reflex camera dates back to April 2011. At that time, I were shooting landscapes & seascapes, mostly long exposure, one of my favorite technique. However, telling urban stories based on photographs soon grew inside me as something self-evident. To me, slow shutter speed was still an intriguing, fascinating technique which I learned to dominate – exclusively hand-held – in the Paris subway. So there it was, in the Paris underground, that Street Photography really began for me, back in autumn 2012. The subway’s pervasive graphic settings brought the canvas to tell my human, urban stories. By early 2013, I came out of the subway to shoot the street and its 2 “actors”, Man and Setting. The use of wide angle framing is deliberate, as a way to grant its importance to the setting – often a graphic one. For me it is as crucial a component as the character – often a single one – to build the picture and provide context to the scene. 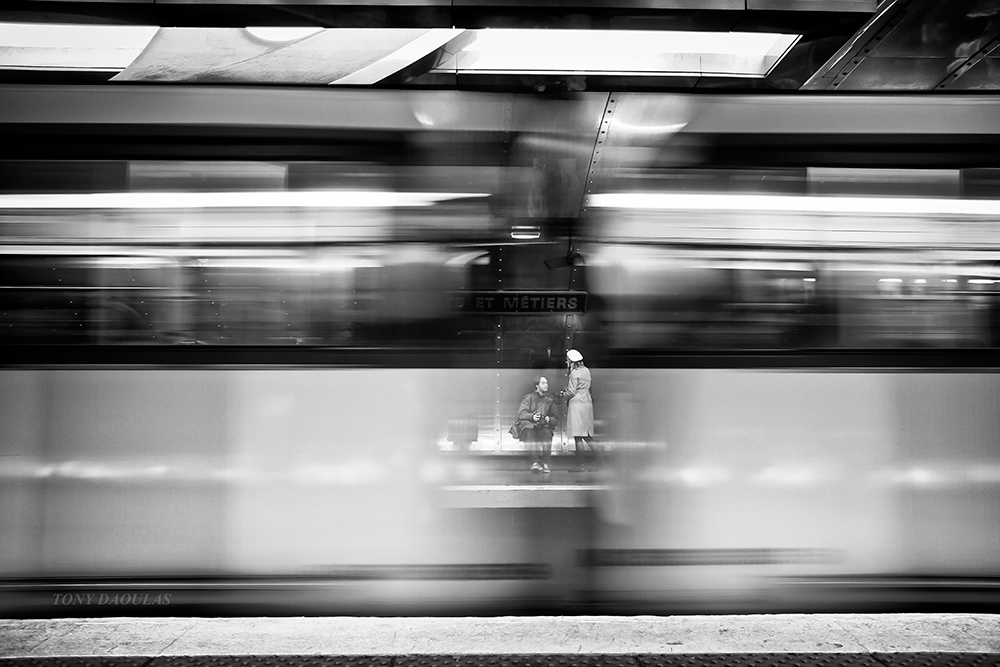 How has your style changed since you first started?

As I said, the transition from Landscape/Seascape to Street was quite fast. As a consequence, my style quickly changed too. I have modified my approach, the way I observe a scene I plan to shoot. Infusing meaning into the picture and telling a story. I have also learned how to improve framing, compositon and Black and White processing 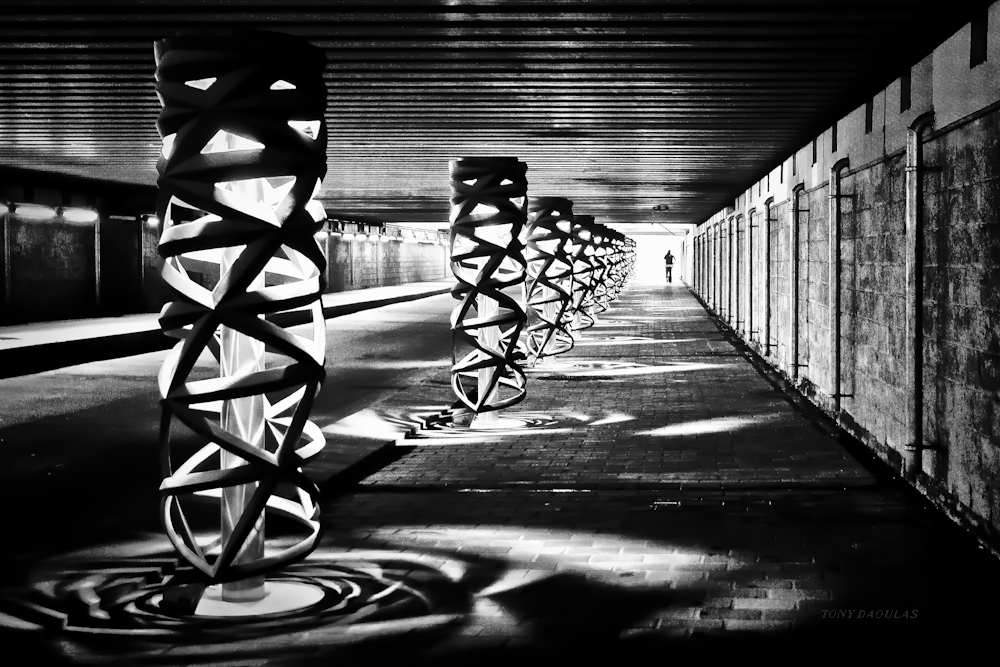 What equipment are you using now and with what did you get started?

I started with a Canon 500D equipped with its standard lens (18-55mm). Now I’m working with a Canon 60D and a Tamron 17-50mm. I also use the latter for professional filmed projects (TV, coporate, trailers, etc… 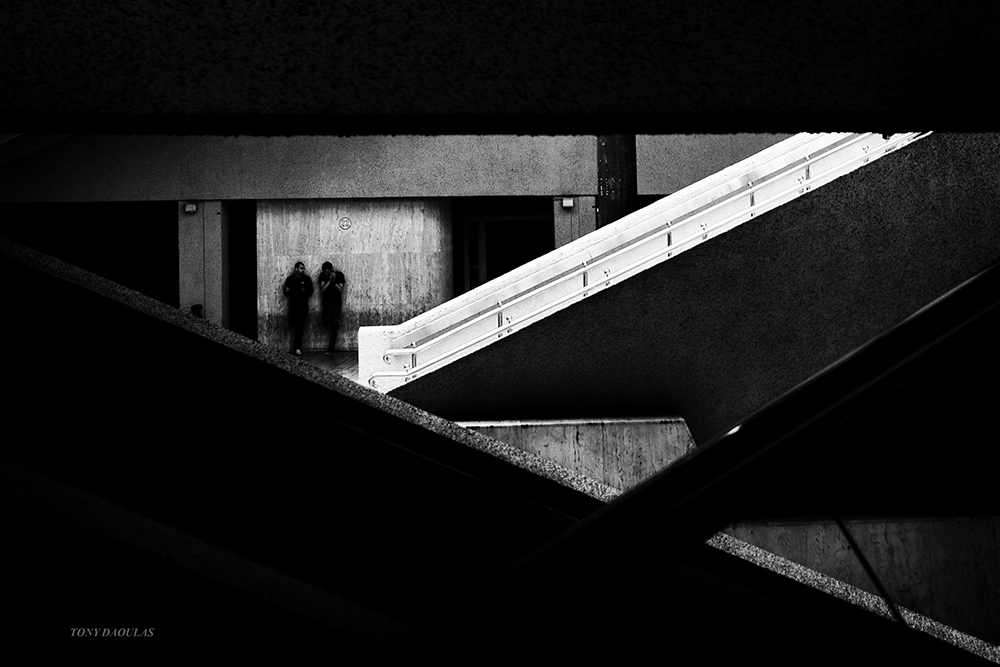 Can you tell us about your work flow from the point you first step onto the street until you showcase the developed picture?

Depending on the situation, I work in an instinctive or intuitive fashion. When there is a chance, street magic bring you a scene where everything falls into place, the “eye/rapid shot” couple must work perfectly if you don’t want to miss “the picture”, which is gone the next second. On the contrary, when I happen to discover a street setting which I like and read things in, I know that, with the good character, I can tell a story that I have imagined already, including in its post processing implications. Then I wait until the ‘actor” steps into the setting to shoot.
Once B&W processing is completed, I usually share my pictures through social media and my web galleries. However, I think that a picture can only really exist on print. Whenever possible, I like to print my pictures. I am lucky enough to work with a photo lab specializing in Piezography print. The result of this printing process is simply awesome for all Black and White lovers ! 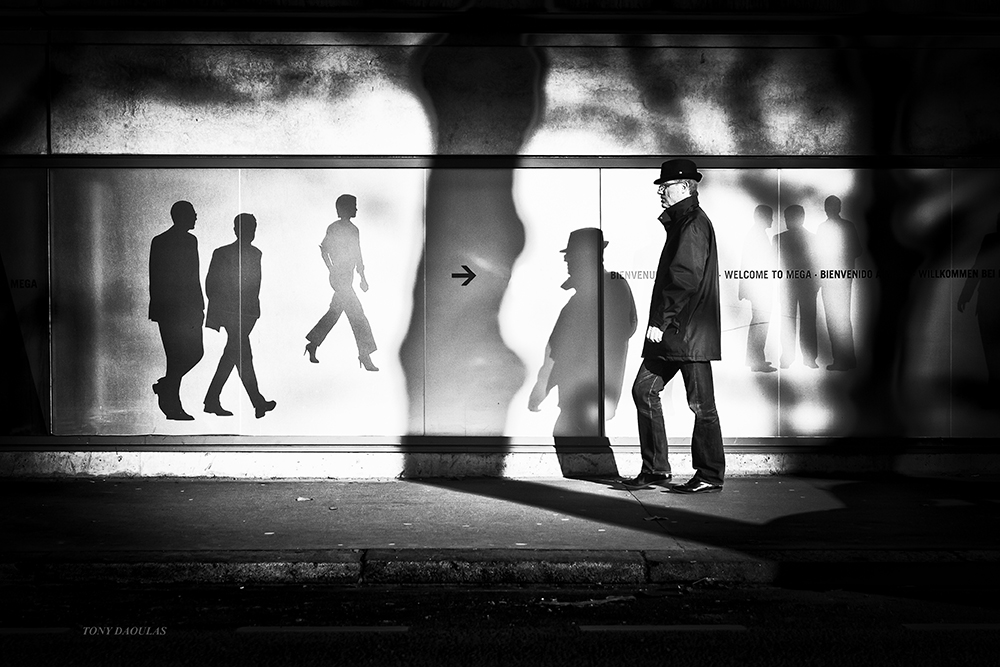 It’s seems that you are very comfortable using photography hand-held with slow shutter speed. Can you explain this inclination of yours ?

Slow shutter speed is a technique I really like. Besides, I am lucky enough to have some skill for hand-held shooting at very slow speeds (down to 1/4 sec.). Working on movement in a picture while shooting is a fascinating, exciting thing.
Unfortunately, many people with little knowledge in the matter believe that these pictures are the result of Photoshop jobs, montages, superimposed pictures, HDR, …
At the latest Salon de la Photo in Paris, I had the pleasure to present a large part of the works I did in the Paris subway for an exhibition named “Paris-New York Underground” with my mentor and friend James Vil, co-author of the event. The picture below was part of the exhibition. This one tended to puzzle visitors, and, to my astonishment, many photographers, who believed it had been made up of several different pictures. It is, however, really only one picture, shot at 1/5 sec. 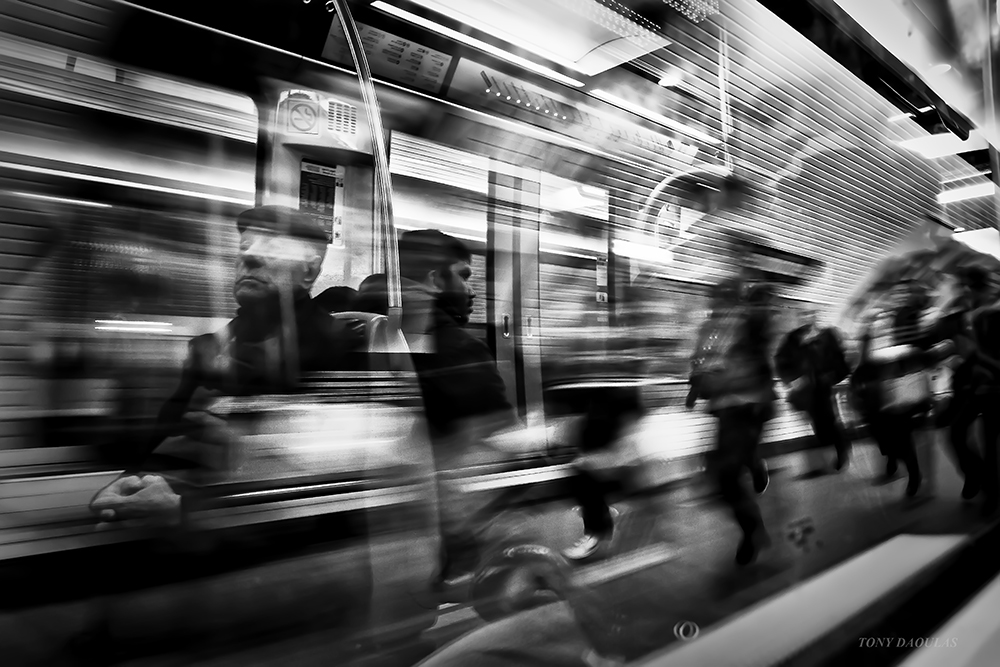 Do you see a particular influence, be it a photographer or school on your work? Any subject that attracts you?

I don’t think I draw my inspiration from a particular individual or photographer, but I probably do, unconsciously. Like I said before, cinema has always been a big source of inspiration for me. 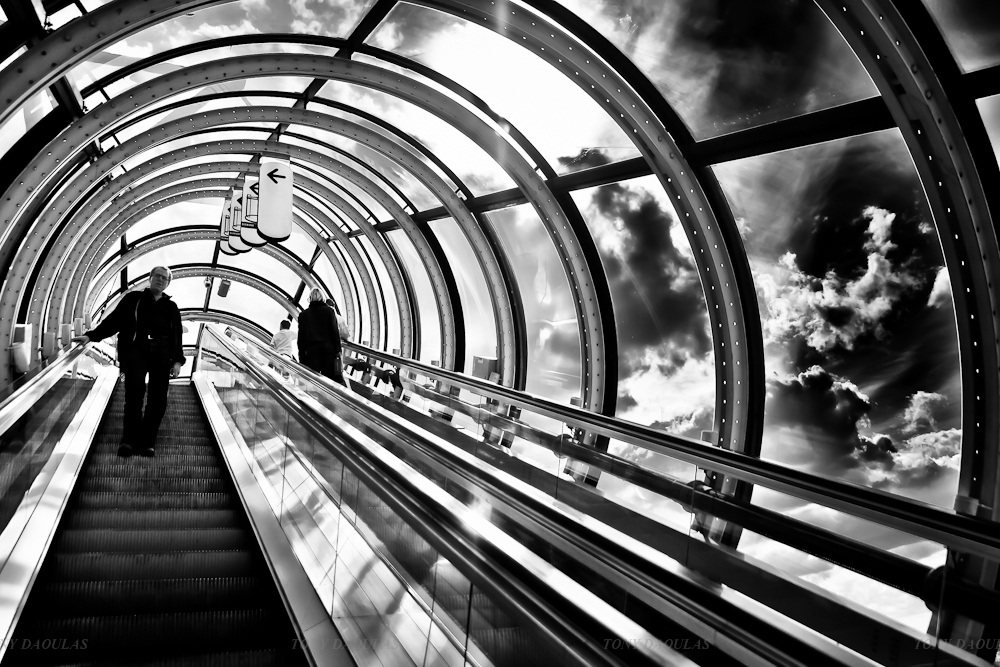 Do you see your personality reflected in your work? And if yes, in what image does that come apparent to you.

I believe that, consciously or unconsciously, we all put a part of ourselves in our photographs. That is said, which would be those of my photographs with that autobiographic part I don’t really know, I guess only people who know me well could tell… 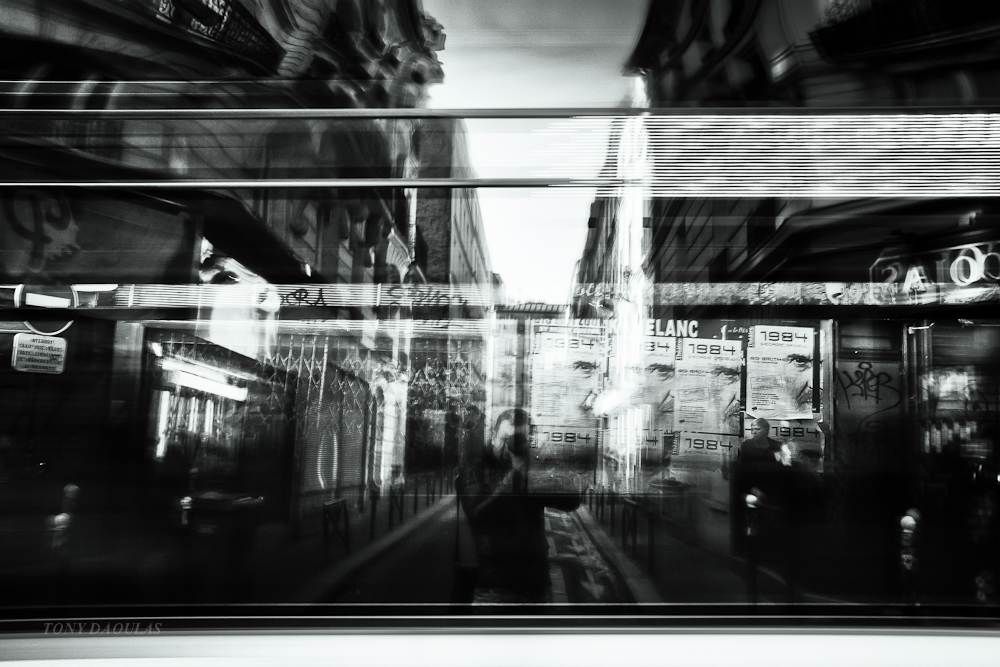 Among your work, which is your favorite and why?

Without hesitation, I choose this one: “Big brother is watching you”. This picture gathers all the elements I mentioned earlier, my inspirations (here George Orwell’s “1984”, one of my favorite anticipation novels) combined with hand-held slow shutter speed.
I had spotted the setting – the wall with the posters for the “1984” stage adaptation – 2 days before. I knew I had something to shoot here. When I came back on the spot, I observed the scenery, what was happening there. A bus driving by immediately gave me the clue to what I wanted to do. I waited for the character to stop at the right place near the posters and I began shooting in burst mode at 1/4 sec when the next bus drove by. The magic of slow speed worked, I got the picture I wanted with all the information revealed by the reflexión in the bus’s windows.
This picture was the starting point to the “Fanta-Street” series I made in 2013, entirely inspired by SF/fantasy/anticipation movies. 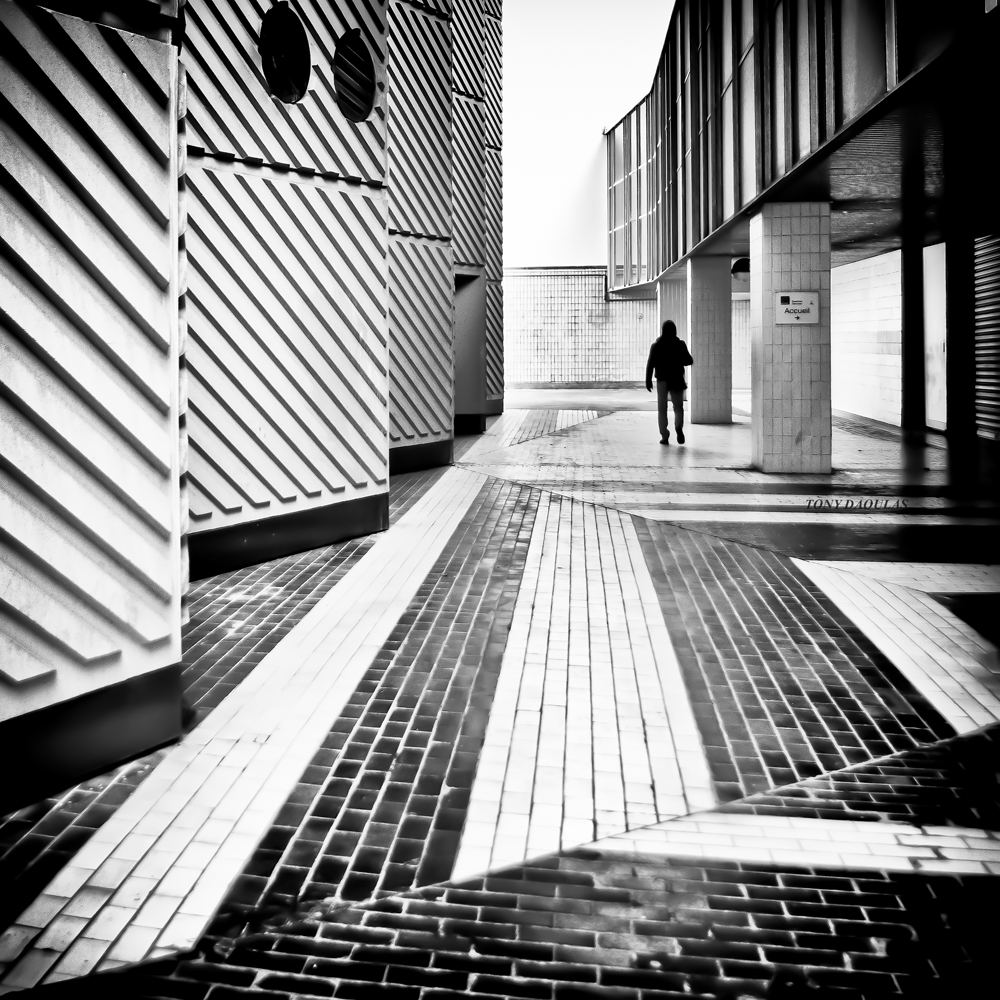 What are some of the most important lessons you have learned from shooting on the streets?

Street photography made me even more thoughtful and demanding when it comes to framing and composition, even if I still tend to make too many mistakes when shooting. Those are useful mistakes anyway, as they help me improve. 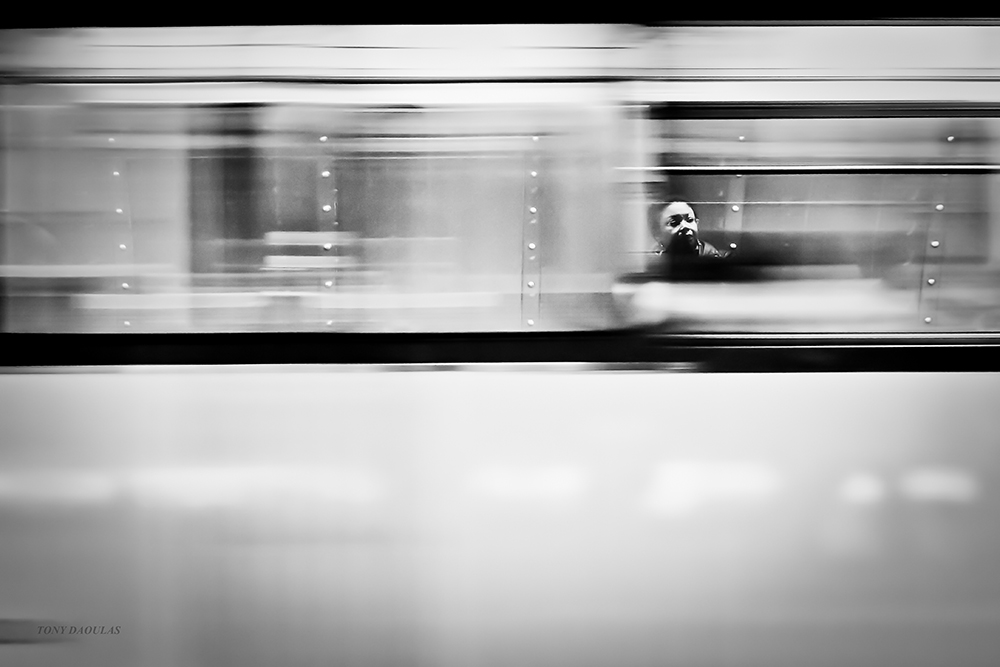 What would you tell a newcomer who asks for your advice on how to start?
As a beginning, self-taught photographer, I don’t know if I have the legitimity to give genuine good clues to get started. However, I often answer to people who ask me this question : ” Don’t listen to other people or the arguments of manufacturers who tell you that if you buy such and such equipment, you’ll be a great photographer and you’ll shoot awesome pictures. That’s just a lie. First, you’ve got to learn to “watch”. No tool will ever replace your eye” 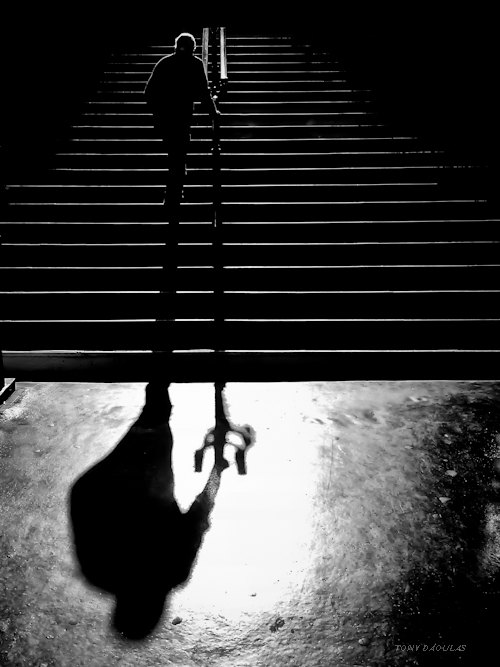 Thank you very much for this interview.

Tony Daoulas is a submitting regularly at Street View Photography France, like the page to get the latest news.

This content was created by the Street View Photography community – for the community of Street Photographers.
Interview done by Fabián Úbeda Spura